In front of the assembled Wananga, Arakite trustee Robert Willoughby discussed this paper by Arahu Marsters, David Thomas and Ahmad Zainudin, which was originally read for the Melayu-Polynesia Conference held at Waitangi in 2014, and the content is still relevant. The role and character of Kupe is still actively researched and argued, in Maori and Polynesian circles. These authors present selections from the Kupe Chant known in Manihiki, one of the Northern Group of the Cook Islands, showing its relevance to the voyaging story, and the origin of the Maori.

Since the development of the Sundaland theory, supporting the origins of the Austronesian‐speaking peoples in the Malaysia and Indonesian region there has been continuing interest in the origins of the Austronesians. One source of information is the origin or discovery stories that are common in the islands inhabited by Pacific peoples. Within Polynesia, the island groups have traditional stories about the origins of the first people who discovered and settled the island groups. A common story in Eastern Polynesia is that of Kupe, a navigator and explorer. This paper looks at one of the Kupe origin stories, from Manihiki in the Northern Cook Islands. The Manihiki Kupe chant includes technical information about how these journeys were planned and conducted and communicates the skills and knowledge needed. The chant also acknowledges the achievements of the ancestors who made these voyages. Such origin chants provide a sense of identity for later generations.

Background (Ahmad Zainudin)
Austronesians are defined by a shared group of languages encompassing approximately 351 million people. The Austronesian language family is the one of the largest in the world, with around 1200 languages widely dispersed throughout islands in Southeast Asia and the Pacific Ocean, with a smaller number in continental Asia. In geographical terms, the language group covers a wide area in Oceania from Taiwan in East Asia to New Zealand and Easter Island, with an outlier in Madagascar. One branch of the Austronesians is referred to as the Malayo‐Polynesians, based on their shared linguistic origins.

Until about 15,000 years ago, the sea level was around 120 metres lower than current levels. The lower sea level had two notable features that would have facilitated migration in the Southeast Asia region. Malaysia, most of Western Indonesia and Vietnam were part of a large peninsula known as the Sunda Shelf or ‘Sundaland’ which extended as far as the south‐western islands in the Philippines.

While the origins of the Austronesian groups is still being debated, it is clear that the early Malayo‐ Polynesian explorers of the Austronesian group, identified by the Lapita pottery pattern, migrated through Sundaland and the Bismarck Archipelago to Island Melanesia, and subsequently to Western and Eastern Polynesia, to become the first human settlers in these locations (Thomas, 2011).

Polynesian origin stories typically include discovery and settlement of a current island home, a distant origin island or homeland (Hawaiki) and one or more founding ancestors who made the original voyages by canoe from the origin to the current island home. Origin stories may distinguish between explorers who discovered previously uninhabited island and who returned to live in the homeland from which they came and settlers who left their homeland to settle in a new island home. Within Polynesia, each of the island groups has traditional stories about the origins of the first people who discovered and settled the island groups. A common story in Eastern Polynesia is that of Kupe, a navigator and explorer. This paper covers one of these stories, that of Kupe the Manihikian.

Manihiki is an atoll in the northern Cook Islands, part of an island group including Manihiki, Rakahanga and Tongareva (Penrhyn). The Manihiki atoll comprises 12 small islands. The Manihiki group was traditionally known as Fakahotu Nui. Manihiki was first visited by European ships in the 1800s including visits by American whaling ships in 1822. It became a British protectorate in 1889 and in 1901 became part of the New Zealand Cook Islands administration. Fishing and pearl shell are the main exports. 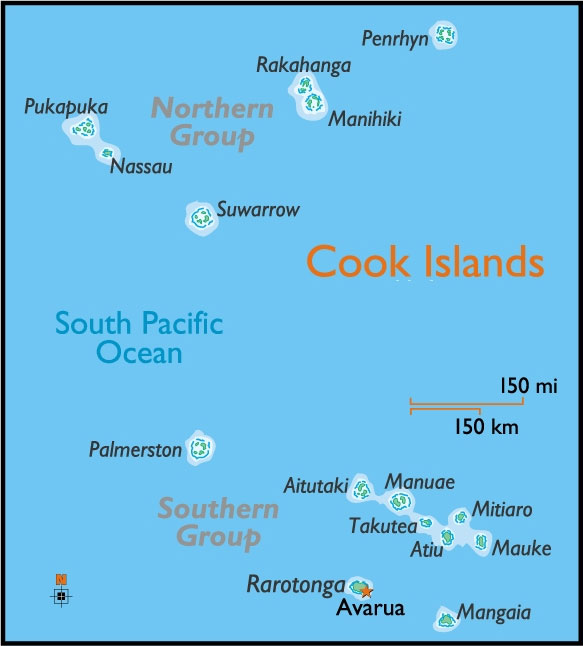 The connection between fishing and the discovery of islands is part of the Manihiki tradition. A fisherman named Hiku is said to have found Rakahanga Island while fishing for atu from Rarotonga. Later the three Maui brothers came to the same area and began fishing. Maui‐mua caught a shark, Maui‐roto an ulua, and Maui‐muri the island of Manihiki. Maui is also said to have fished up other islands such as Tonga and Aotearoa (New Zealand).

This traditional association between fishing and the discovering islands suggests that fishermen were the most frequent discoverers of islands in ancient times. Fishermen roamed the ocean looking for new fishing grounds or chasing schools of migratory fish. They may also have been driven off course by storms on their way to known fishing grounds.

A poetic way of describing discoveries of previously unknown islands is to say that the fishermen ‘caught’ islands. The name of Maui may have been given to anyone discovering an island, in honour of some ancestral fisherman‐explorers noted for finding islands.

The people of Manihiki believe that Tongans were some of the early settlers of Manihiki, Rakahanga and Tongareva. Historically, the Manihikians were large in size and were imposing. There are graves in Manihiki and Rakahanga well over eight feet in length.

A fisherman named Hiku is believed to have had found Rakahanga Island while on an atu fishing voyage from Rarotonga. The Chant is:

This Chant refers to the reef passage way in Avatiu, Rarotonga. In our tradition, the original inhabitants of Manihiki and Rakahanga were Toa and Tapaeru of Rarotongan origin.

Traditional knowledge and lifestyle on Manihiki

People in Manihiki and Rakahanga are people of the sea. Living near the seaside brings knowledge of reading the weather, watching the clouds, birds, coconut leaves, waves, wind directions, behaviour of insects and many other environmental features.

The lagoon is an area of comfort and peace. People dive into the lagoon for enjoyment and relaxation. It helps reduce the tension of all day’s work. It is also a place where most of the food is available such as fish, crabs and clams.

Children are taught sailing and paddling at an early age. When a boy is considered mature from 13 years or older, he will be gifted an oar or canoe. It is a momentous occasion when gifted these possessions. Sailing is often taught to every young person as part of growing up in Manihiki. Visits are regularly made to distant islets to collect coconuts, pandanus, haustorium, fish and birds.

As part of their adaptation to their environment Manihikians closely studied the ocean and the sea life and birds they observed. Understanding wave patterns is part of local wisdom. Waves are generated by wind and the phases of the moon. The wind normally arrives before the waves, but its height is predetermined by different phases of the moon. As wind drags over a stretch of ocean, it pulls up ripples on the sea surface. They believe that waves come in sets of seven. Our people believed that ocean waves are much safer to handle than the reef waves.

Knowledge of the feeding patterns of birds, fish, turtles and sharks was used to indicate the presence of other islands. Some birds cover large areas when migrating over the Moana o Kiva or Pacific Ocean. Manihikians consumed the gut and meat of a several birds. Our ancestors believed that the “roto” or gut to be the best part of the bird, Most of the roto of smaller fish species were safe to consume. The larger fish such as tuna and sharks also carry information in their stomach and they would have eaten a variety of smaller schooling fish on their migration routes. Our people also studied turtles which provided information from their stomach. Turtles travel long distances in the ocean and have the ability to process food slowly and to eat over longer periods. Ocean debris such as floating logs was also useful. All these sources provided information for identifying previously unknown islands.

Some of the initial sections of the Kupe chant are shown here. Kupe’s whakapapa (genealogy) is not clear, but this is the chant that is known in Manihiki.

In this section of the chant, there is a focus on the multiple sources of information that were used for navigation on ocean‐going canoes (vaka). These included; the sun, moon and stars, floating debris, and birds. The section also notes how Tangaroa (the sea god) provides life for people in a canoe.

Voyagers to Aotearoa from Eastern Polynesia would have observed the long‐tailed cuckoo and bar‐ tailed godwit, which were land‐based birds, flying south through the central Pacific islands on their annual migration. These migratory birds would have indicated the direction of land (Evans, 2011)

By noting the exact direction of the flock of birds took year after year in relation to setting stars and planets on the horizon, the precise coordinates for an expedition could be charted. (Evans, 2011, Kupe’s Voyage to Aotearoa)

The next section, Te Hanonga (The Journey) includes a description of the different states of the seas and the multiple weather conditions that might be encountered during an ocean voyage. The chant provides an account of the activities and experiences likely to be encountered during a canoe journey. Of particular note is the mention of wave sequences. Wave formations are one of the key indicators used in Polynesian ocean navigation.

Paroro‐muri marama e – The month of storms has arrived

The blessings at the end of the section (The Matafourua canoe is blessed, the return is blessed, the month of storms has arrived, There is life, There is life) creates an expectation of successful completion of the journey. Given the hazardous nature of journeys by canoe, anticipating a positive outcome from a voyage would be important for the morale of the voyagers and family they leave behind.

The sections described above are just a small part of the overall chant. These sections were selected for illustrative purposes and do not convey the extensive knowledge contained in the Kupe chant. There are similarities with other Kupe chants such as those from Aotearoa/New Zealand (e.g., Biggs, 1957; Te Matorohanga, 1913), but there are also differences.

The interpretive stance, used for the sections of the chant described above, looks for patterns of information that provide a guide for long‐distance ocean voyaging. This interpretation draws on personal experience of ocean voyaging to identify knowledge important for such voyaging. The stance differs from a literal interpretation in that the focus is on patterns within the chant, not necessarily the specific details. Such an interpretation accepts that specific details may change over time in the telling and retelling of the chant. Thus specific details may or may not provide reliable indication of historical events, such as the number of canoes which came to Aotearoa.

Traditional chants provide a means for traditional knowledge to be passed on to later generations. In societies that did not have written records, oral traditions were the primary means of maintaining knowledge. Recording traditional chants such as the Kupe chant increases the likelihood that the information they contain will be available in the future.

The Manihiki Kupe chant provides an account of how the early Polynesian explorers and settlers travelled by canoe and settled in the widely scattered islands of Eastern Polynesia including Aotearoa/New Zealand. The chant includes technical information about how these journeys were planned and conducted and communicates the skills and knowledge needed. The chant also acknowledges the achievements of the ancestors who made these voyages. Such origin chants provide a sense of identity for later generations. They honour their ancestors who were people with extraordinary skills and knowledge.

This paper was presented to the Melayu‐Polynesia Conference, Waitangi, November 2019.

Biggs, B. (1957). The Story of Kupe. As  written down by Himiona Kaamira. Journal of the Polynesian